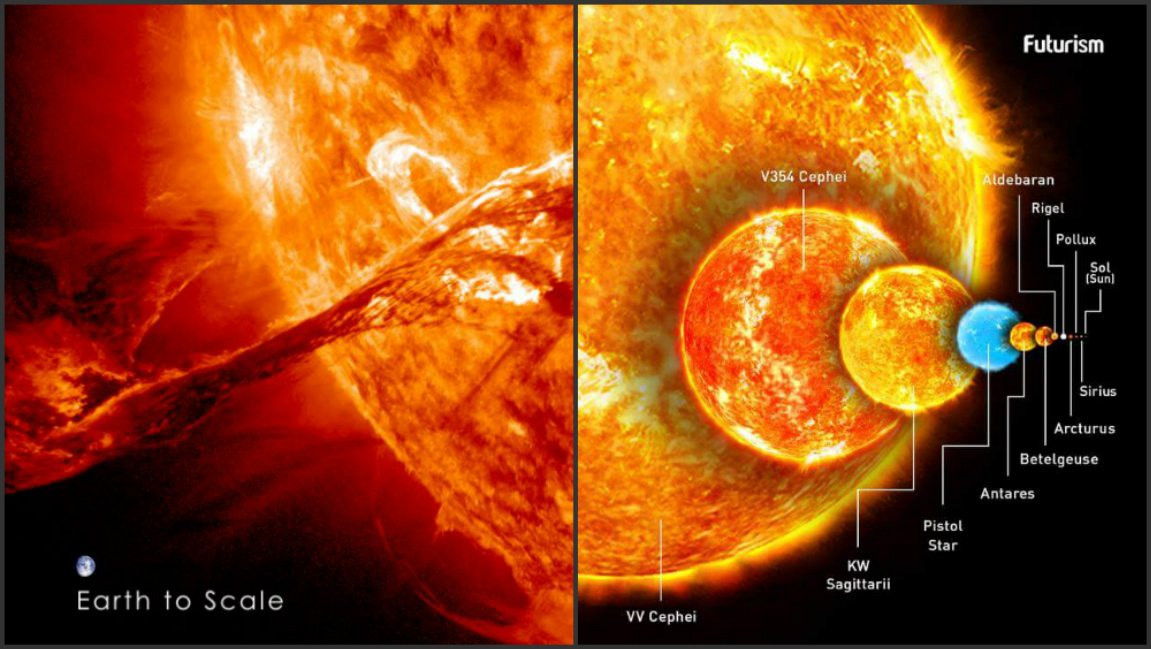 Image above:
Left: The Earth compared to our Sun.
Right: Our sun (one pixel) compared to VV Cephei

Our universe is vast, however, from our little area of space, we can assume that what we can see is the biggest that there is out there. This is not true, our sun for example is an average size star in comparison to some of the biggest stars out there like UY Scuti. The UY Scuti star is approximately 30 times our sun’s mass. The Voyager 1 Spacecraft is another example, heading out of our solar system at 62,000 kilometers per hour, it is still expected that it will take 77,000 years for it to reach the closest star.

When we go further into space, we start talking about light years. At this point, kilometers are too small to measure such impressive distances. A light year is the distance light travels in a year. In kilometers, a light year is approximately 9,500,000,000,000 km.

The brightest star in the sky, Sirius, is 8.6 light years away.

The brightest star in the Southern Cross, Acrux. is 321 light years away.

The brightest star in Orion, Rigel, is 777 light years away.

The Center of our galaxy, which hosts Satigarus A*, our black hole, is 27,700 light years away.

The Perseus Cluster, composed of thousands of galaxies, is 190,000,000 light years away.

One big myth when it comes to distances in space is that everything is in a straight line. The universe is full of objects and things with mass and energetic quanta. Due to matter and energy, spacetime can be curved because of gravity, therefore the distance between any two points in space depends on the shape of the universe between those two points. This curvature is also not permanent because our universe in itself is not static. It is subject to change also because it is filled with matter and energy and everything is constantly moving and being transformed.

The edge of the universe, the furthest distance at which we can see light, is about 13.26 billion light years away. The very edge is a little further at about 13.8 billion light years. We do not detect light from the edge, though, but we do detect a radio signal which we call the background noise. The size of the universe is said to be even larger than this because the universe is ever expanding. Although it is expected to be finite, we cannot reach it all.

In this article, we will talk about some of the most fascinating distances and dimensions in the universe. Planets, stars, galaxies, and groups of galaxies are all of great mass, distance, and dimensions. The Milky Way Galaxy is 100,000 light years across according to NASA. The biggest galaxies are said to be millions of light years across. What can be observed from our universe is estimated to be 50 billion light years in all directions. Astrophysicists state that about 13.8 billion years should be given for the possible expansion of space.

GQ Lupi b was discovered in 2005. It is orbiting the star GQ Lupi and it is two and a half times further from its star than Pluto is from the sun (about 100 AU). The status of this exoplanet has been contentious with some speculating that it could be a brown dwarf. If it is indeed an exoplanet, it is the largest exoplanet known with a radius at least 3.5 times bigger than that of Jupiter.

Note: Jupiter is at times considered a failed star as it emits some light, which is one reason it is so bright in our night sky.

IC 1101 is the largest galaxy discovered. It is 50 times larger than the Milky Way and 2,000 times more massive than our galaxy. We stated that the biggest galaxies are millions of light years across, and IC 1101 is an incredible 5.5 million light years across. This distance is so big, that were it to replace our Milky Way, it would extend past our neighboring galaxy Andromeda.

Speaking of quasars, these gargantuan objects were numerous in the early universe and they are the most powerful light and radiation emitters. Some quasars have reportedly come together to form clusters. The largest known cluster being the Huge-LQG aptly abbreviated from Huge Large Quasar Group. Its mass is a whopping 6.1 quintillion suns and it contains 73 quasars. Its distance measures 4 billion light years across.

Apart from The Laniakea Supercluster, the biggest supercluster found in the universe is the Hercules-Corona Borealis Great Wall (HCBGW). Found in 2013, it has been the subject of several studies by astronomers who have found that it is 10 billion light years across. This giant has been said to go against basic principles of cosmology that states that matter should be uniform at large scale. Hercules-Corona does not conform to this principle. It is speculated that there could be superclusters that are bigger than HCBGW. It was discovered after gamma rays were found to be concentrated in the area approximately 10 billion light years away close to the Hercules and Corona Borealis constellations. This is considered to be the biggest thing in the entire universe to be discovered so far.

The Tarantula Nebula is the largest nebula and the most active star-forming region in our neighboring galaxy. At its widest distance, it is 1,800 light years. It is located in the Large Magellan Cloud which is 170,000 light years away from the Sun.

The largest empty spot ever found by astronomers was found by NASA’s Wilkinson Microwave Anisotropy Probe (WMAP) satellite. The void was found in Eridanus and is completely empty. Neither stars, gas, dust nor dark matter is found within this region. It measures 1.8 billion light years across and the size of it has shocked researchers as to how it was formed.

Protocluster SPT2349-56 was formed when 14 galaxies crushed into themselves forming a massive cosmic object. This object occupied a space that was only three times the size of our galaxy ultimately forming a galaxy that was 10 trillion times the mass of the sun.

In 1930, astronomer Harlow Shapley discovered a huge collection of galaxies and named them Shapley Supercluster. With a mass 10 million billion times our sun, it constituted 8,000 galaxies.

Galactic farts are bubbles that can only be observed at a certain wavelength of light. The Fermi Bubbles 25,000 light years tall were discovered by the Fermi Space telescope in the year 2010. Researchers claim that after the feeding of the black hole found at the center of our galaxy, there was an enormous release of energy similar to a belch leading to this galactic fart.

The Largest Objects within our solar system

Jupiter is the largest planet having a diameter of 142, 984 kilometers. This is 11 times bigger than the earth’s diameter.

Ganymede is the largest moon in our solar system. It also orbits the largest planet Jupiter. Only slightly larger than Mercury, it is 5,268 kilometers in diameter.

The largest volcano is found on Mars and is the Olympus Mons. It is also considered to be the highest mountain in our solar system at 25 kilometers high. This is three times Mount Everest.

Valles Marineris found on Mars is 3,000 kilometers high and 600 kilometers wide and with a depth of 8 kilometers and is the largest canyon.

Utopia Planitia is also found on Mars and is the largest crater with a diameter of 3,300 kilometers. Viking 2 landed on this crater in the year 1976.

4 Vesta at 530 kilometers across is the largest asteroid and is located in the asteroid belt between Mars and Jupiter.

Pluto is considered to be the largest dwarf planet in our solar system, just barely ahead of Eris. It is 2,370 kilometers in diameter.

What About the Smallest Things?

Some contenders of the smallest things in the universe include:

At the center of a black hole is the singularity. According to physics, black holes are formed when matter is condensed into a small enough area that gravity takes over pulling it inward up to a certain point of density. It has been theorized that black hole singularities are possibly even smaller than quarks. They could be a million times smaller than the distances we have observed so far.

A Planck length is 1.616 × 10-35 meters. This figure is unbelievably small. A Planck length has not been measured by any instruments created. It has however been theorized that it is the shortest measurable length in existence. Below this length, conventional laws of physics no longer give reasonable answers. This distance correlates with the distance at which gravitational pull is so strong that it can start to make black holes and similar creations. At this length, it is expected that quantum gravity takes over.

The smallest things in the universe should be approximately a Planck’s length.

So how did the Planck scale come about?

Max Planck came up with the Planck length over 100 years ago. He worked with three constants:

You can combine these in different ways to come up with time, distance, or mass.

How about smallest time scale?

Interestingly enough, we have not yet found a way to determine the smallest possible amount of time between two points in time. As mentioned earlier, space and time are affected by matter and energy. We have a good handle on both of those. But time has been eluding us so far. We are not even sure how time functions in a black hole.

We use the Planck Time which is the amount of time it takes for like to go between two points separated by exactly one Plank Length. This is around 5.39 × 10-34 seconds. At this point we think that there is no need for us to have a smaller measurement of time. Also, that’s the smallest amount of time between two intervals that we can ever hope to measure.

With these figures in mind, you can imagine just how big our universe is. Everything on Earth is pretty small in the grand scheme of things. When light leaves the nearest star Proximus Centauri it takes four years to reach earth. Things observed in the universe are seen as they were in the past. When seeing Andromeda, you can guess that you are probably viewing it as it was 2.5 million years ago. We cannot completely comprehend how big the universe is, and it is constantly growing, and that is the beauty of astronomy!

Distances between Planets (when aligned) in The Solar System

The Solar System is already way beyond our understanding of distances as humans. We are so small… and as mentioned earlier, many science fiction movies make it look like things are accessible in minutes if not seconds.

Josh Worth created the Tediously accurate map of the solar system web page with the moon represented by one single pixel. You can scroll left and right and see the Sun and then each planet and some of their moons. The positions are accurate to the pixel. You’ll see that the time to scroll is, well…. awfully long!

This map, of course, shows distances that are averaged and kind of as if the planets were aligned which very rarely happens. Since the whole solar system is in constant movement, it is more complicated to get there with a space ship.