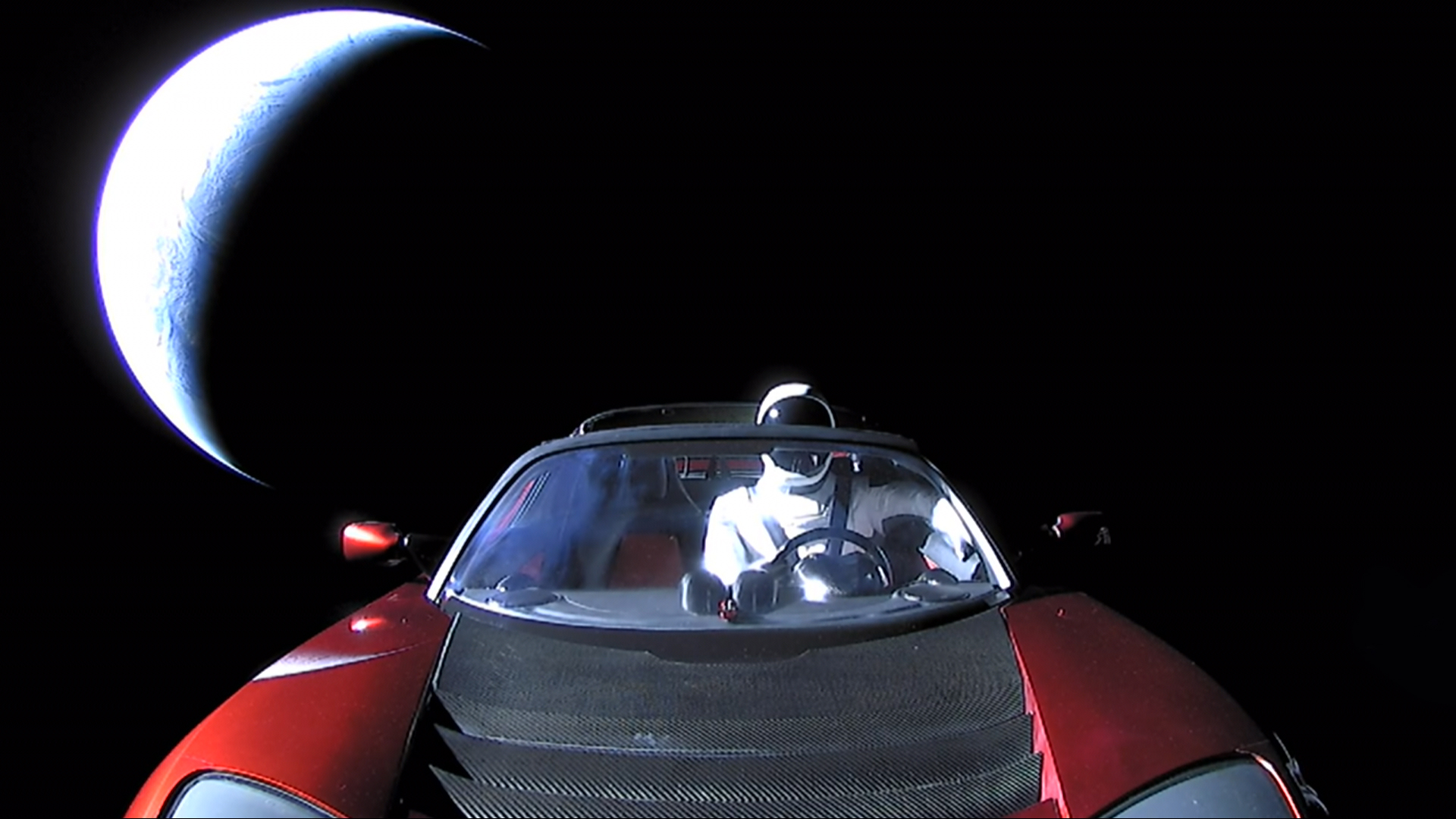 The picture at the top is one of Elon Musk’s car that was sent to space using the Falcon Heavy rocket (as a proof that the rocket is ready). No one wanted to send a satellite on a brand new rocket so SpaceX decided on creating a stun instead by sending a car with cameras. The camera feeds were live for a while. (See Source for more info and copyright information)

Think of a highway of sorts, winding through planets and the Sun creating tunnels – that is essentially what space highways are. These gravitational channels are created when stellar objects, such as planets within our solar system, tug at each other creating forces between them. These forces act like ocean currents that can be used to propel objects that come into these areas. When a spacecraft moves into these tunnels, the forces can be used to push it to its intended destination.

The most common way for space crafts to move from one object to another is through Hohmann transfers. Hohmann transfers take place when a rocket is fired at great speeds that its orbit around the earth is large enough to cross Mars’ orbit around the sun. Gravity assists have also been used to help rockets get to their destinations. In this method, a spacecraft uses gravitational energy from another planet to propel it to its destination, similar to a slingshot. This method is mostly used to send probes to points much further away from the Earth. Spacecrafts that need to go even further than areas where gravity assists can work, need to eventually slow down or have more fuel to maneuver.

Lagrangian points always follow the less massive of the two objects. Because of the gravity of these points and as a result of this, an ever-changing landscape of hills and valleys are created in the solar system. These hills and valleys are what scientists use to propel space crafts. If an object is atop a gravitational hill, it can simply roll down into a valley. According to studies done by NASA, when Lagrange points from two different orbits overlap, it will take little to no effort for a spacecraft to move from one orbit to the other. That is to say, with the right overlaps, a spaceship can move say from Earth to Mars using very little fuel. This ever-evolving gravitational hills and valleys are what make the interplanetary superhighway. This method, however, cannot be used for every mission. To get Lagrange points to overlap, it could take years that astronauts do not have.
These low energy transfers have been used for several missions. In 1991, a Japanese Lunar probe ran out of fuel to complete the mission, these low energy transfers were then used to save the journey.

Although to take full advantage of space highways, regular rockets must also be used to reduce the time spent on a journey. If we were to go on a journey on the gravity channel between Earth and Mars without rockets, it would take astronomers thousands of years to get to their destination. If you were to add propulsion, and by mapping out these gravity channels, it could greatly speed up the entire journey.

Interstellar superhighways are arguably the easiest and most energy-efficient ways for space crafts to travel through space. We’ll now look at the shortest routes on earth.

The fastest way from one point to another in a perfect Cartesian space is a straight line.

Here is a picture of a flat plan with two points and a line. The segment between point A and B is the shortest route between those two points.

This is also true in most places in space (albeit in three dimensions).

Similarly, on an oceanic journey, ships use similar calculations to travel faster from one point to another. However, it has been shown that shorter routes will get you closer to icebergs. The Titanic is one such example. The captain of the ship decided to take the Great Circle in an attempt to win a prize for the fastest journey taken.

Great circles are more advantageous in the air than in the sea. For instance, a flight from Europe to East Coast (US) would take 7 hours if the aircraft was traveling at 800km/h over 5,600 kilometers. On the sea, however, a ship can take 24 hours traveling 402 kilometers if using the Great Circle.

What exactly is a Great Circle?

A Great Circle is “where the radius is equal to that of the globe when taken at the center of the globe representing the shortest distance between two points on the surface of the earth.” If you cut an orange in half, whether horizontally or vertically, the area where you cut the orange is known as the Great Circle. The equator is an amazing example of a Great Circle.

Through a Great Circle, we can connect any two points or two places on the Earth by the curvature line of a Great Circle. These circles are the shortest possible routes between these two points. You can draw a geodesic in any direction or at any angle on the Earth’s surface. Unlike Space Highways, geodesics of Great Circles do not use the power of gravity to create routes, rather it is calculated using simple geometry math. You need the radius of the Earth and two points on the surface of the Earth.

Above we talked about highways between planets, highways that we’ve used many times already.

In 2020, a team of astronomers in Serbia and the US found a new set of highways between the Earth and every single planet and the fringe of the Solar System. These highways will allow us to go much faster.

On September 5, 1977, we sent Voyager I that was used to study the outer planets, mission which it completed successfully in 1989. The ship continued to function and since has been used to probe space at the fringe of our solar system. In 2012, Voyager I entered the Heliopause. That region is an area between the Sun Wind far reach and Interstellar Space. It’s only in March 2013 that the space craft really reached Interstellar Space. At the time, we’ve discovered that our knowledge of that region was somewhat off. It also means that it took that spaceship a little over 36 years to escape the Solar System.

With this new discovery, we will be able to reach the same region of space in just 10 years.

These highways have actually been used by Comets and other objects to travel inside our inner Solar System in decades instead of thousands of years. The main culprit? Jupiter! Our giant planet is actually exerting very strong gravity pulls on many objects. It is even capable of sending some of these objects in Outer Space.

Also we knew of the effects of Jupiter’s pull for a long time and even used it with Voyager I and II, we had not studied possible much large highways. Now that we have this data, the next step is to look into how to make use of these highways with our man-made spaceships.

Quantum Entanglement is what happens when two quantum particles interact. Once these two particles interact, there is a correlation between the two because their quantum properties become entangled. They are therefore interdependent. This analogy was first coined in the 1990s by two physicists, Sandu Popescu and Daniel Rohrlich.

To explain entanglement, we’ll take an example of an electron. Electrons have two quantum properties; spin up and spin down. When two electrons become entangled, their spins become correlated. If one has a spin down, the other electron will have a spin up. In 1935, Albert Einstein pointed out the probability that this situation can happen if going by the laws of quantum mechanics. However, he pointed out that the theory was flawed. Niels Bohr suggested that in the case of the two electrons for example, when the first one is observed and measured and found to have spin up, the second one automatically has spin down. Einstein found holes in that theory. He called it “spooky action at a distance”.

He and two of colleagues Podolsky and Rosen then stated that there should be another probable reasoning behind this. This was also largely because he had proved that no object (signal or information) could travel faster than the speed of light. Meaning it was impossible for these instantaneous actions to happen. He then suggested that these two properties already had properties that had predetermined their spins. He called them “hidden variables”.

So from these two theories, is it possible that quantum information moves faster than the speed of light? From measurements and studies, it seems to.

But still, this does not debunk Einstein’s theory of relativity because we are not able to control the outcomes. When the two electrons are measured separately, we will get our results, and only when compared will we know that their spins are directly opposite to each other.

So how can quantum mechanics travel so fast?

The predictions from hidden variables and quantum mechanics are different, however, calculations have proved quantum mechanics right. This means that the idea that the moment the two particles are entangled, they develop hidden properties that already determine their direction is completely false. It means that when we measure one particle, information is transmitted to the other particle at a speed that is faster than light. And that in itself is mind-blowing.

However, we still cannot share information at a speed that is faster than light. The collapse of the wave function is statistical meaning that it cannot transmit information. If Amy and Sheldon both got entangled particles and were trying to use information, when measured, there would be a 50/50 probability that they would get either a spin up or a spin down. There would be no way for them to know before they did the measurements. They would only be able to compare, once they had done their measurements and compared notes through classical means of communication beating the purpose of faster than light communication.

Quantum interconnectivity, however, can be used for quantum computing and quantum teleportation. Quantum communication is useful in improving security and privacy because when intercepted, the message read is going to be different than the original. Thus it removes all security threats.

The idea of quantum communication and quantum mechanics, in general, is being explored greatly and it will be fascinating to see just what the outcome will be.

So from space highways to geodesics to quantum communication, we have taken you through the “fastest” ways man can move through space, on the earth, and how information could possibly move at a speed faster than light. Do you think the idea of quantum communication is possible? Let us know below.